‘I believe I can fly…….I believe I can touch the sky…….Every night and every passing day……I spread my wings and fly away…..’ these opening words of a famous English Song sung by Seal….would best describe the thrill, passion and enthusiasm of a paragliding junkie.

Paragliding is a recreational as well as competitive sport which has gained popularity only recently in India. It allows the glider to blend into his surroundings very naturally after getting accustomed to his carrier and fly into the sky like a free bird. Despite not having an engine propeller, the flight can go on for several hours and also gain altitude up to several thousand feet, depending on whether the pilot is deft at manouvreing. The different types of paragliding tours in India are Hang gliding, powered paragliding, speed riding/ flying and kite skiing. This sport can be enjoyed by people of any age group or gender with minimal training and the beauty of it is that the control lies completely in the hand of the individual flying the glider. The sport is easy and safe.

So, if you seek adventure, want to live out your fantasy of flying in the sky like a bird and experience that adrenaline rush, here is a list of some of the finest paragliding destinations in the country. 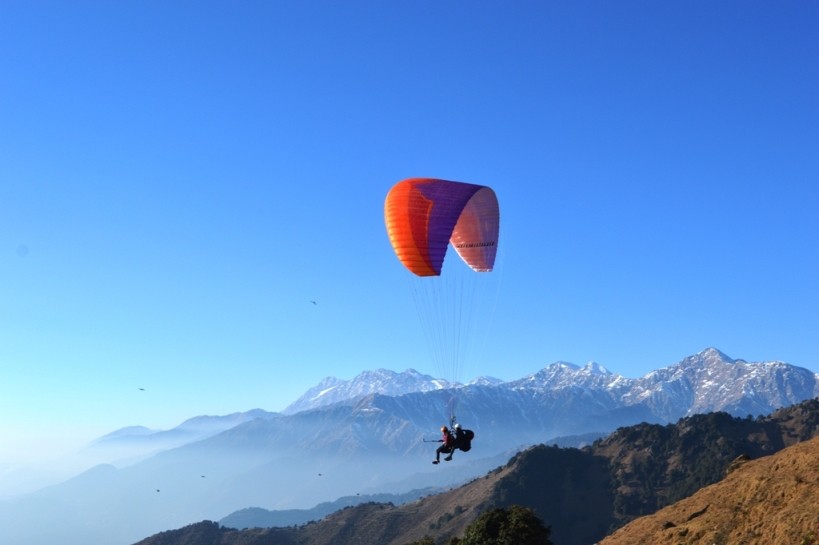 The list of great paragliding destinations in India as well as the world would have to include Bir-Billing. Referred to as the ‘Paragliding Capital of India’, Bir Billing is like paradise in the Kangra district of Himachal Pradesh. The lush meadows of Billing offer a perfect launch platform for paragliders and Bir is the landing ground. The glider can enjoy the beauty of the breathtaking landscapes and lofty terrain while flying. Bir Billing has a fleet of trained instructors that ensure proper training for novice paragliders.

The best season for the activity here is from April to June and from September to November, at the onset and tail-end of the south-east monsoons when the winds are constant.

By air – Kangra Airport, which is 67.6 km away from the destination, is the nearest airport that connects Bir to the rest of the world. Other airports close to Bir are in Chandigarh, Amritsar and New Delhi.
By train – There is no direct rail connectivity to Bir. The nearest narrow gauge station is in Ahju, barely 3 km. from Bir.
By road – Regular bus services ply to and fro the city of Bir. They operate on a daily basis, whether day or night, from places like Shimla, Dharamshala, etc. You can also take shared taxis or cabs for the same route. 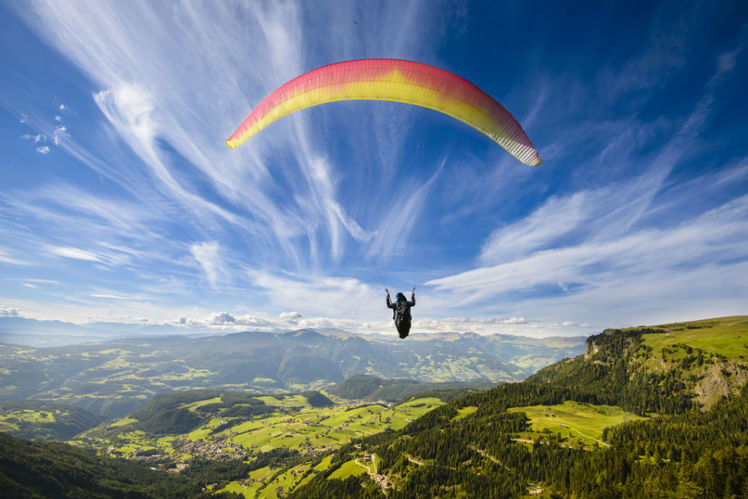 Manali is another destination in Himachal Pradesh vying for the attention of paragliders. Besides being hailed as one of the most popular and loved hill stations for a vacation, this picturesque locale has also begun to be sought out exclusively for paragliding activity. Solang Valley and Marhi are two of the most famous spots for paragliding activity here. Flying over the picturesque Manali slopes and Kulu Valley is like a dream come true for an avid paraglider.

One can indulge in paragliding activity in Manali throughout the year, except during the monsoons.

By air – The nearest airport is at Bhuntar which has flights coming in from Delhi and Chandigarh.
By bus – Manali is very well connected to cities like Shimla, Kullu, Leh, Dharamshala and New Delhi with a good network of state-run as well as private buses. 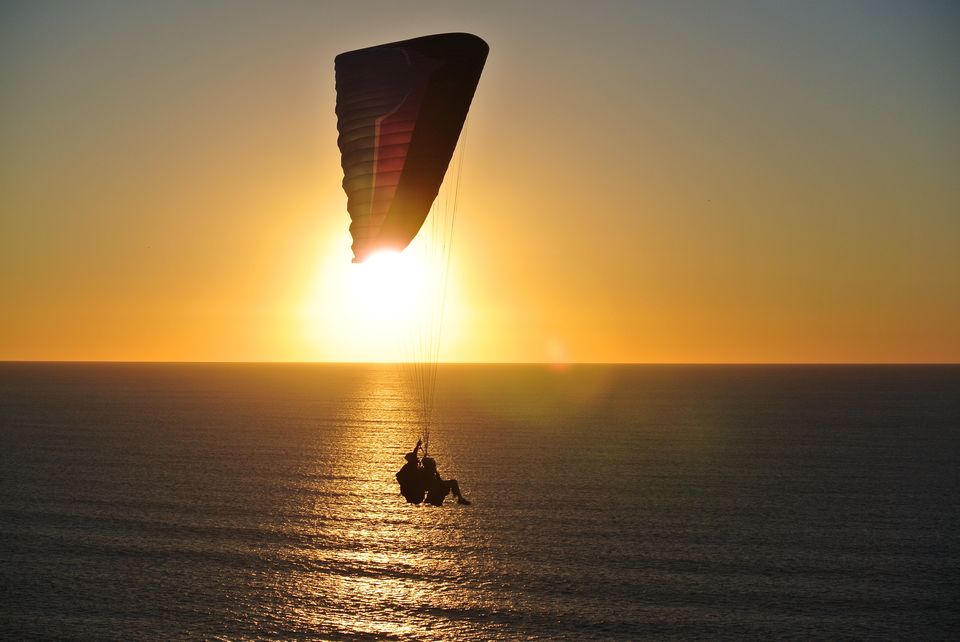 This is one of the best locales for paragliding within Maharashtra. Kamshet is located in Pune district, just 16 km from the popular hill stations of Khandala and Lonavala and the paragliding activity here, offers one a wonderful chance to enjoy the lush green hills and valleys of these locations. Experienced and passionate teams of paragliding pilots and several schools, based out of Kamshet, offer their services for training or tandem flights. These pilots are certified and licensed. The best season for paragliding activity in Kamshet is from October to May.

By air – Pune airport is the closest to Kamshet, which is 55 km away from the city. It is connected to some major cities of India.
By train – The Lonavala railway station is well connected to Delhi, Mumbai, Kolkata, Bengaluru, Cochin, Goa etc. One can hire a taxi or bus to take you on to Kamshet.
By bus – Kamshet is well connected to other cities in the country via state-run as well as private buses. 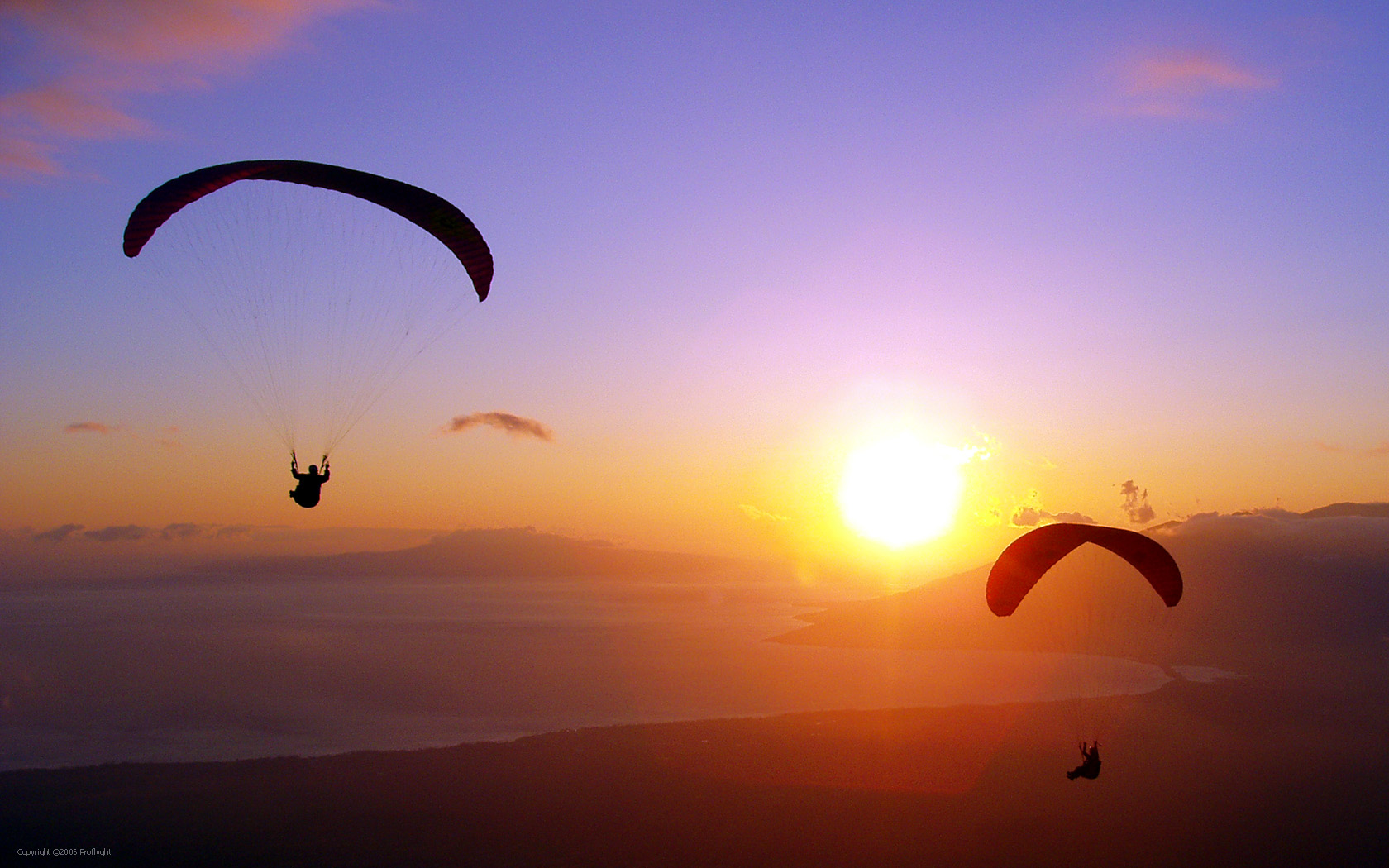 Goa offers a vast choice of places for paragliding activity but Arambol beach has proven to be one of the best locations for indulging in this sport. Though Goa is known for its professional paragliding activities, this place is also ideal for a learner of the sport, as professional expertise is always at hand to help you learn and enjoy the experience of flying. The preference of this destination to enjoy the sport, is evident from the number of paragliders one can see in the sky. Obviously it is a fascinating experience to be flying high above the hills, with the sky just over you and the endless sea beneath you.
The best time to enjoy the sport here is from the end of September till early June.

By bus – One can travel to Goa from several cities including Mumbai, Pune, Chennai etc through a fabulous network of private as well as public bus operators.
By air – The Dabolim Airport, 29 kms away from Panjim, has regular flights coming in from several cities like Mumbai, Delhi, Bengaluru, Chennai, Hyderabad and Cochin.
By train – The main railway stations in Goa are at Madgaon and Thivim which are very well connected with the rest of the country. 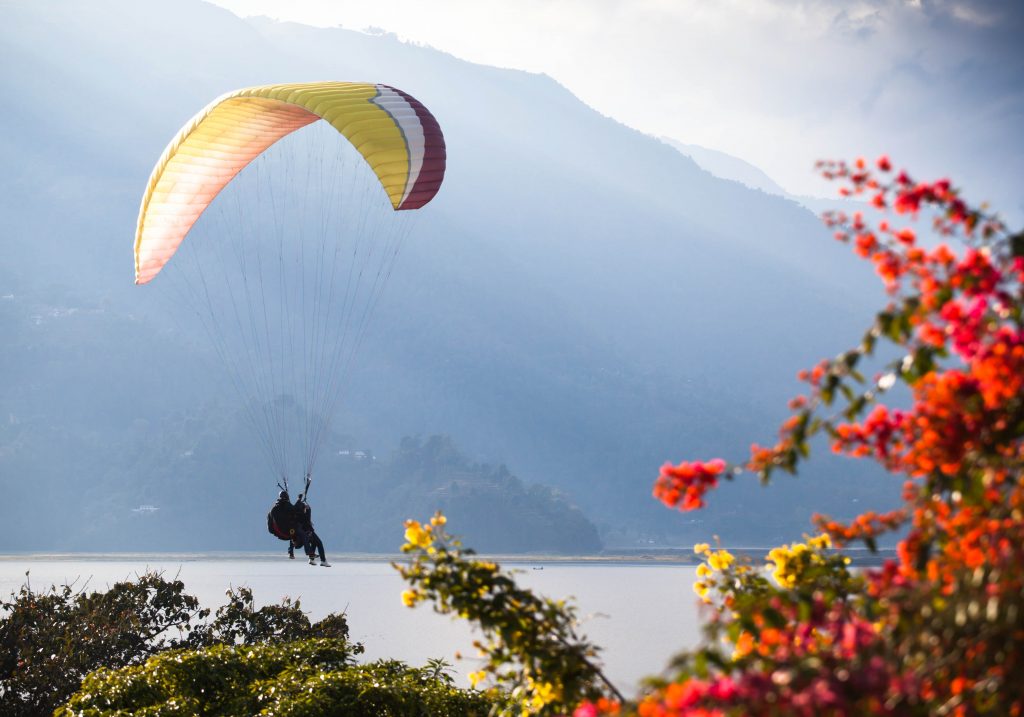 Nandi Hills, the popular hill station for Bengaluru, is quite the centre of activity for paragliding enthusiasts. Flying freely at 4581 feet above sea level, over green rolling hills and picturesque surroundings, is indeed an amazing feeling. Karnataka State Tourism Development Corporation has started offering paragliding joyrides at Nandi Hills since the recent past, where a professional co-glider accompanies you on your flight off these marvelous hills. Professionals and trainers prefer Nandi Hills for paragliding activity because of its ideal topography

Nandi Hills enjoys this activity from October till March.

By air – Nearest airport to Nandi Hills, is the Kempegowda International Airport at Bengaluru from where one can hire a cab to take you to Nandi Hills.
By train – The nearest railway station is at Oddarahalli or at Doddaballapur.
By bus – The nearest bus stand is at Nelamangala as Nandi Hills does not have one of its own. 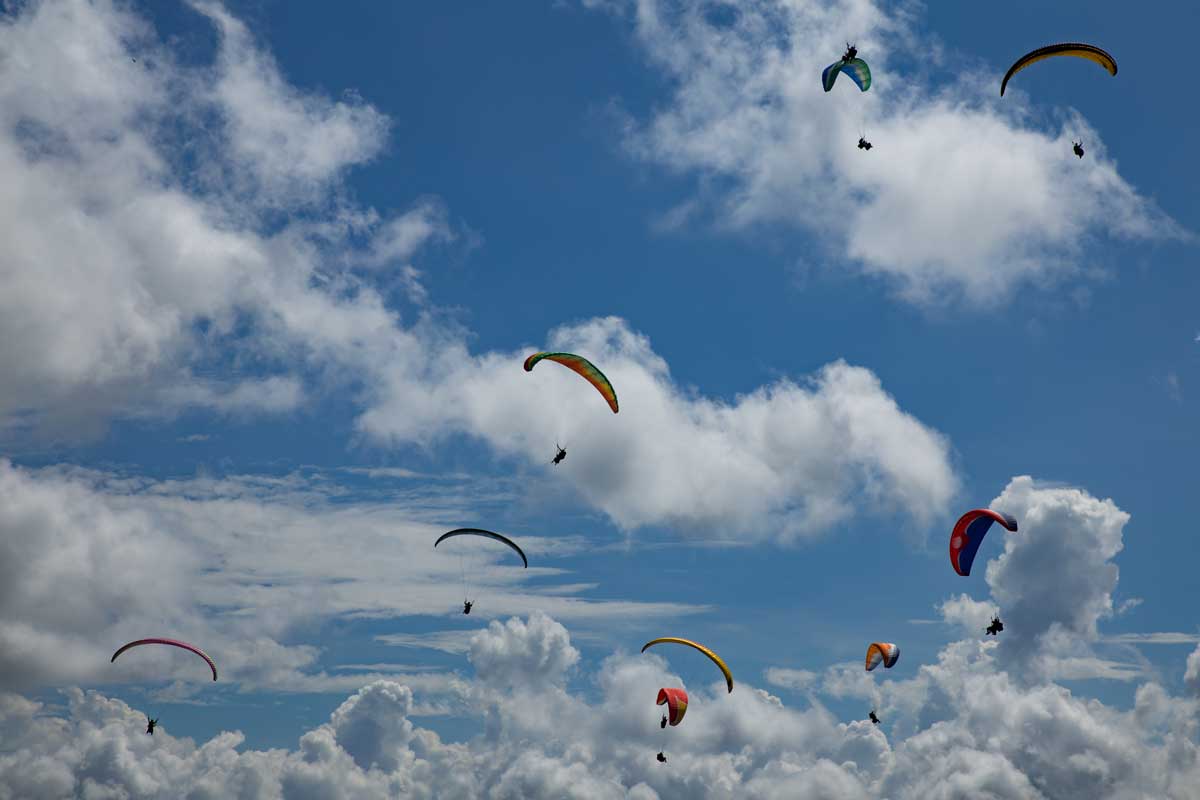 This scenic hill station in Tamil Nadu has been developed as a paragliding destination in recent times. Paragliding from a height of 2200 metres, literally gives you a birds eye view of the splendid forest area and lush hillside of this location. The sincerity of further developing this destination for adventure sports is evident from the fact that Yelagiri even has a special Club (Yelagiri Paragliding Club) that promotes the sport and provides all the necessary facilitites and training for paragliders. The club hosts a paragliding festival annually in September.

The best time to enjoy this sport is from November to February. 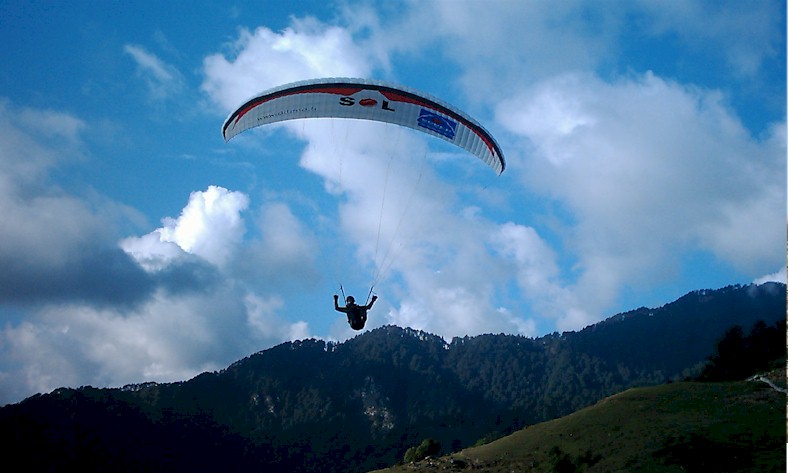 Gangtok in Sikkim, is a a relatively newer entrant as a destination for paragliding. But this North-Eastern destination has slowly proved to be an enthralling site for paragliding activity with its idyllic terrain and stunning view of the magnificent Himalayan range and snow peaked mountains. Taking flight from these Gangtok cliffs is no easy feat and once in the sky, one is rewarded with spellbinding views of Sikkim and Gangtok. The Sikkim Paragliding Adventure Sports Cooperative Society Ltd has all well trained Sikkimese pilots trained by the Sikkim Government. Besides offering tandem paragliding flights, they pamper visiting paragliding pilots who are experienced, with paragliding tours and also para trekking expeditions, to see the sights and enjoy Sikkim aerially.

Sikkim is ideal for paragliding during the summer months from April to June.

One can mostly reach Gangtok by road from nearby places like New Jalpaiguri, Siliguri, Darjeeling, Bhutan, Phuntsholing or if desired fly in by helicopter from Bagdogra to Gangtok.