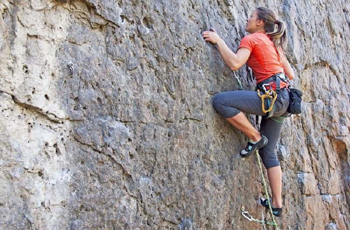 It is a well known fact that India has some fantastic terrain for rock climbing activities. With the majestic Himalayan region in the North and the Western Ghats in the South, India can boast of some ideal destinations for one of the most loved adventure sports in the country, rock climbing. A sport that requires ample physical strength, good technique, patience and some daring, Indians have taken to this activity with gusto over the last several years and are willing to scale new heights each time. Thus, in this article, we have covered a few of the most popular rock climbing spots in India.

Parvati Valley, in the Kullu district of Himachal Pradesh is known for its very rocky terrain and wonderful trekking location. Its rocky outcrops with glittering mica and alpine flower plantations, make this a much loved spot for rock climbing. The breathtaking landscape, lush greenery and sight of the gushing rivers in the valley only add to the experience and joy of rock climbing at Parvati Valley.

Another location eagerly sought out by rock climbers is the Sar Pass, which is located in Parvati Valley of Kullu district, in Himachal Pradesh. According to the local dialect, Sar means frozen lake. This terrain with snow all over, offers lots of opportunities for rock climbing and rappelling and does not deter trekking and rock climbing enthusiasts from indulging in their favourite activity. Expeditions are organised every summer as it is one of the best times to indulge in both rock climbing as well as trekking. The pathway is beautiful, with breathtaking landscape.

Regarded as the second best rock climbing location in India by adventure enthusiasts from India as well as abroad, Miyar Valley is located between Pir Panjal and Zanskar Range and is part of the Lahoul Range. More than 50% of the area of Miyar Valley is covered with glaciers. Also known as the Valley of Flowers, lush green forests, snow covered peaks, scenic little villages, gushing rivers and breathtaking landscape are all main features of this valley. Surrounded by Zanskar and Ladakh, which are famous for trekking and camping, it is only natural and inevitable that adventure enthusiasts would love to indulge in some exiting rock climbing activity amidst these magical and thrilling rock climbing peaks.

Shey Rock, located in Jammu & Kashmir, is ideal for basic level rock climbers. The rock formations here are unique and so favourable, that even beginners can attempt this activity with enthusiasm. The locals also help train in mountain climbing, which makes it all the more enjoyable and fun. This is the only peak that can be scaled in Leh and so one finds a lot of tourists or adventure seekers visiting this site. The view and sights here are mesmerizing and so one should not miss a chance to indulge in this activity here.

Madhugiri is a small town in the Tumkur district of Maharashtra. It is famous for its massive monolith formation which is believed to be the second largest in Asia. Situated at an elevation of 3930 feet, Madhugiri, which is also known as Maddagiri, is visited by trekkers as well as rock climbers. This locale has even more appeal because of the massive rock dome with a fort on top of it, with ruins of the Gopala Krishna temple and many other giant rocks which overlook the town. Some of these rocks are very steep and adds to the challenge and excitement for rock climbing enthusiasts.

Located about 60 kms west of Bangalore, Savandurga hill is considered to be one of the largest monolith hills in Asia. At a height of 1226 m above sea level, the hill with its granite and laterite, rocky outcrops and spectacular surroundings attracts many tourists who love trekking and rock climbing. There are two pathways for rock climbing, Karigudda which is comparatively easy and Billigudda, which is quite difficult with its steep slopes and rocky surface. However, the view of Bangalore city at the top of the hill is well worth the effort of rock climbing.

Ramnagar or Ramnagara Hills in Karnataka is a much sought after location by rock climbers and trekkers. Very famous for its steep rocky outcrops, this hill in the southern part of India is ideal for some real challenging, technical rock climbing. The climb or trek up this hill is mostly attempted only by professional rock climbers or qualified trekkers. In fact the technicalities of rock climbing can be learnt here. Some of the popular hills to climb here are SRS Betta, Thenkingal betta and Ramadevara Betta. At the same time, there are many short granite hills in this place for beginners to climb too.

Malshej Ghat is located in the Western Ghats and is famous for its forts, caves and temples. Known for its lush greenery and spectacular waterfalls just after the rains, these hills are also famous for its hiking, trekking, rock climbing and other activities. Rock climbing and rappelling near Ajoba Hill Fort is very popular with amateur adventure enthusiasts.