Most Beautiful Places To Visit In Himalayas Region

India is one of the very fortunate countries within the Asian continent to have a large presence of the Himalayan mountain range. These Himalayan mountains span across the states of Jammu & Kashmir, Himachal Pradesh, Uttarakhand, Sikkim, Arunachal Pradesh and West Bengal in India, adding an ethereal feel to the landscape in these regions. The snow-capped mountains, alpine vegetation, unbelievable tranquility, high-altitude deserts, ancient man-made mountain passes and all things unique to the mountains make these destinations irresistible and inviting. Besides, one can also indulge in various kind of adventure activities in these places. 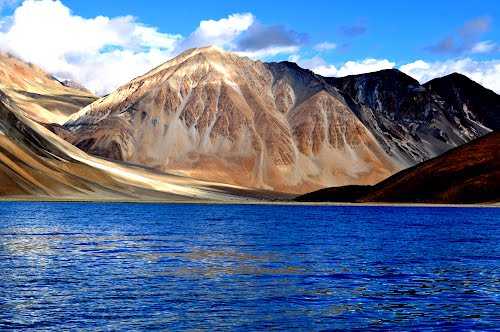 Ladakh is a mesmerizing mountainous destination, located in east Jammu and Kashmir at a height of almost 9800 ft. It is most famous for its spectacular landscape of snow capped mountains, monasteries carved out of caves, beautiful meadows with plenty of Edelweiss and a history and culture very similar and connected to Tibet. Literally meaning ‘the land of high passes’ in Tibetan language, Ladakh connects India to the Silk Road and is one of the least populated places in Jammu and Kashmir. Temperatures here, range from 3 degrees to 35 degrees during summer and -20 degree to -35 degree during winter. Zanskar, the main river, in this region gets frozen during winters and this is the period when the very famous Chadar Trek is undertaken on this glorious frozen surface. The best time to visit Ladakh is from June to September.

By Air – There are regular direct flights from Delhi to Leh everyday. From here one can travel by taxi to the exact destination.

By Train – There is no railway station at Leh. The nearest one is the Jammu Tawi Railroad Station (about 700 km from Ladakh) which is connected to cities like Mumbai, Delhi and Kolkata.

By Bus – One can travel by bus along the Leh-Manali Highway or on the Srinagar- Leh route. Buses are available from Srinagar, Delhi, Chandigarh, Kullu, Manali and Keylong. 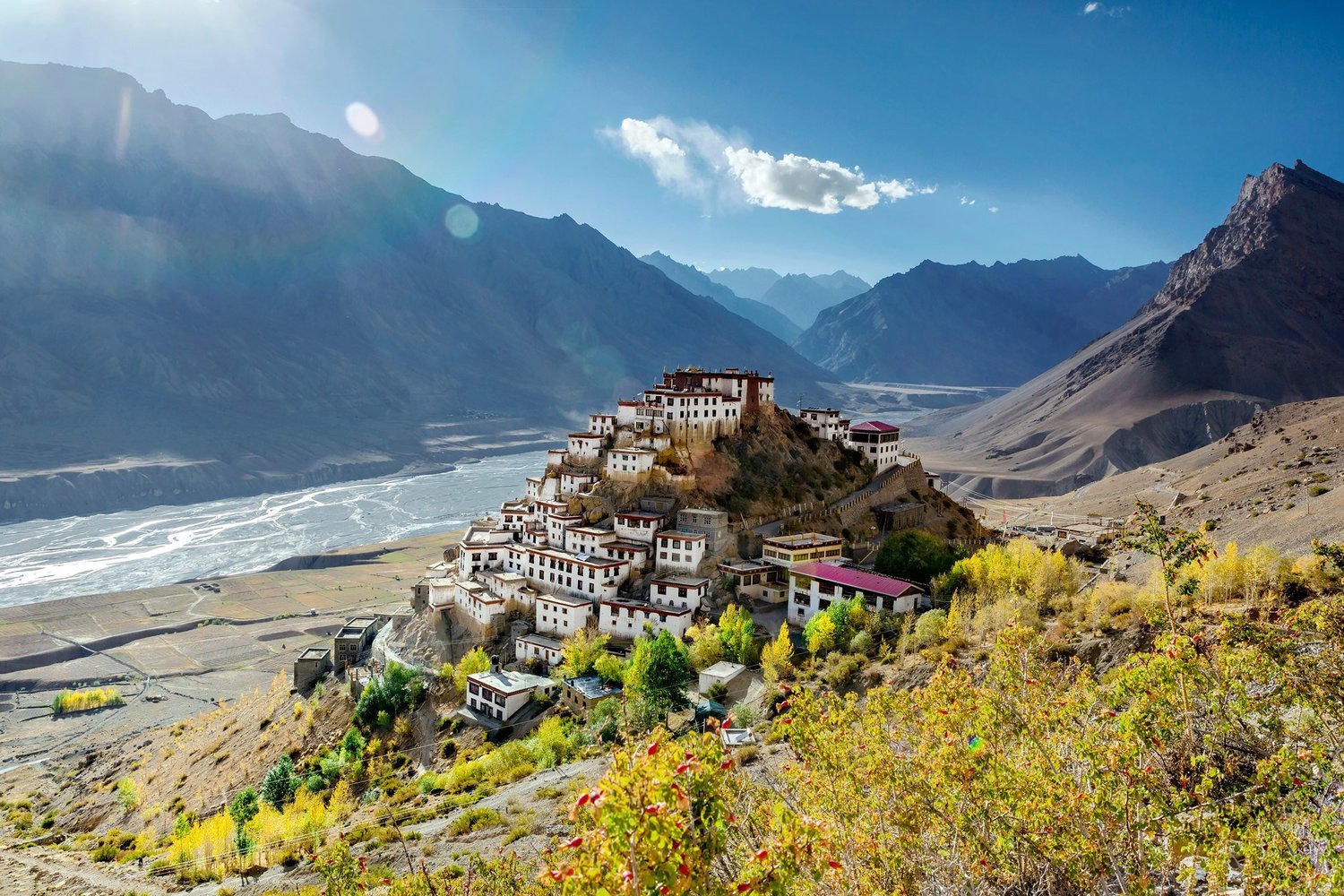 Located in the north-eastern part of Himachal Pradesh, Spiti Valley is a cold desert mountain valley, situated at an altitude of 12,500 feet above sea level, amidst the Himalayas. The word ‘Spiti’ literally means ‘Middle Land’, and in this case, it refers to Spiti being the land between India and Tibet. A sparsely populated region, Spiti is part of the Lahaul and Spiti district and can be best enjoyed as a holiday destination during summer. The magnificent snow-clad mountain peaks, amazing glaciers, tranquil and isolated atmosphere with ancient monasteries are definitely worth experiencing if one is looking for a really peaceful and jaw-dropping picturesque locale for a holiday. One can explore beautiful attractions like the Surajtal Lake, Chandratal Lake, the Tabo Monastery, Key Monastery, Pin Valley and others, while also enjoying activities like trekking and mountain biking.

By Air – Air travel to Spiti is not very easy as the nearest airport to Spiti Valley is in Kullu, which again is a domestic airport and not directly connected to many big cities. From Kullu, one has to travel for about 7-8 hours to reach Spiti.

By Train – The nearest railway station is the Joginder Nagar Railway Station which is about 360 km away from the valley.

By Bus – Regular buses are available from various cities like Delhi, Chandigarh and Srinagar and from several cities in Uttarakhand and Punjab. 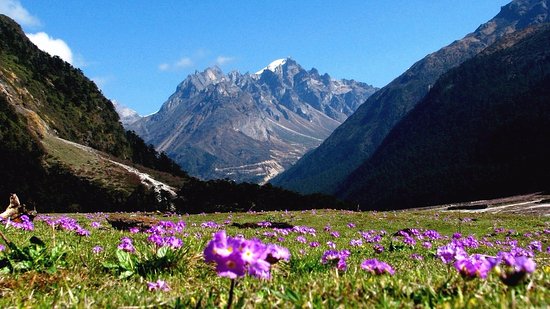 Yumthang Valley is this beautiful natural paradise which is located in North Sikkim and is surrounded by the majestic Himalayas. Situated at an altitude of 11, 693 ft above sea level, this valley is blessed with hot springs, lush green rolling meadows, a river, yaks and other interesting flora and fauna. Literally translated, Yumthang means ‘Valley of Flowers’ and in this case, the valley is abundantly blessed with several varieties of beautiful flowers along with plenty of blooming rhododendrons. Famous for the Shingba Rhododendron Sanctuary, one can find over twenty four species of Rhododendron, which is the state flower. The flowers bloom from late February till mid June and the valley appears as if painted with several hues of colour like pink, red, purple, blue etc. This mesmerizing locale has gained fame over the last several years and is an ideal time to visit if keen to witness the magic of this region. It is also popular as a skiing site.

By Train – The nearest railway station is at New Jalpaiguri in West Bengal, about 144 km from Yumthang Valley.

By Road – Lachung is well connected by road and is about 113 km from Gangtok. 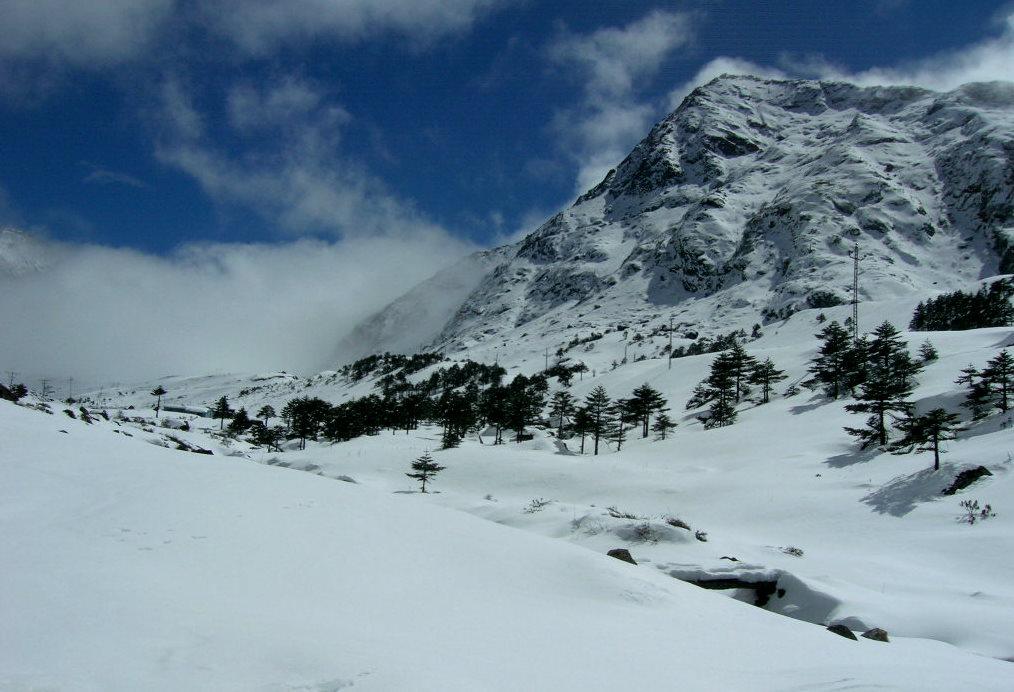 Tawang is this spectacular town in Arunachal Pradesh, located at an altitude of about 10, 000 ft and known for its mystical, surreal ambience with perennial mist and snow. With an average temperature of 10 – 11 degrees, this destination is truly enlivening and apt for those seeking solitude, positivity, fresh rejuvenating atmosphere and spirituality. Tawang is home to several famous monasteries and is also very famous as the birthplace of the sixth Dalai Lama. The Tawang Monastery is most well known and considered extremely sacred for Buddhists. The other most popular attraction is the Tipi Orchid Sanctuary where one can admire nature in its full glory. The best time to experience Tawang would be in the summer months, when one can move around freely without being snowed in, which is from March to September.

By Air – The nearest airport to Tawang is the Salonibari Airport in Tezpur, Assam at a distance of approximately 317 km. Araunachal Pradesh does not have its own operating airport.

By Train – Arunachal Pradesh does not have its own railway system. The nearest railway station is at Rangapara in Tezpur, Assam. One can take a cab or bus from here to reach Tawang.

By Bus – The Arunachal Pradesh State Road Transport Corporation (APSRTC) has regular and frequent buses plying from Bomdila to Tawang. One can also take a bus from Guwahati, Tezpur and Bhalukpong to Bomdila. 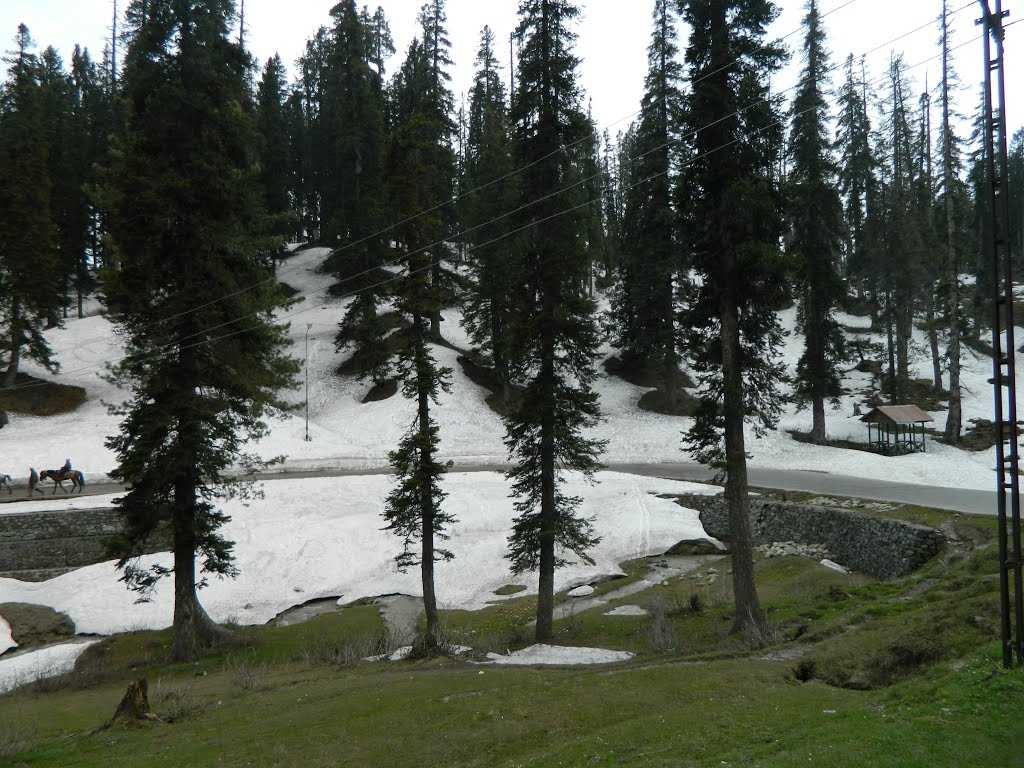 Gulmarg is a picturesque little hill station in Jammu and Kashmir, nestled in the Pir Panjal range in the western Himalayas. Gulmarg, meaning ‘meadow of flowers’, is bountiful with natural meadows bearing beautiful wild flowers like daisies, forget-me-nots and buttercups during the summer months and is normally snowed in during winters. These meadows are also scattered with enclosed parks and small lakes and are bordered with forests of pine and fir trees. Other attractions like Kongdori and Mount Apharwat offer brilliant views of the valley and Khilanmarg is the site where one can get breathtaking views of the Himalayan range. The pride of this town is its famous cable car project, the Gulmarg Gondola, which has been declared the largest in Asia and the second largest in the world and also its wonderfully green golf course, which is considered the highest in the world at about 8690 ft.

By Air – The nearest airport to Gulmarg is at Srinagar, about 56 kms away and is well connected to major cities like Mumbai, Delhi and Amritsar.

By Train – The railway station closest to Gulmarg is about 290 km away at Jammu, which is well connected to several major cities across the country.

By Bus – Private, as well as Government run buses are regularly available from cities like Srinagar, Sonmarg and other neighbouring towns in Kashmir.