Best Places To Visit In North India During Monsoons

North India mainly constitutes the states of Delhi, Rajasthan, Punjab, Uttar Pradesh, Uttarakhand, Himachal Pradesh and Jammu and Kashmir. Monsoons in these states occur mainly from July to September and bring on a different kind of look and feel to these places. Although people generally avoid travelling to a place during the monsoons, real lovers of this season can look forward to a refreshing, rejuvenating, picturesque and dream-like holiday at these destinations where one can enjoy vibrant and lush green hills, snow-tipped mountains with rugged terrain, dense pine forests, green valleys, colourful and beautiful flowers blooming everywhere, full-flowing gushing rivers and streams and spectacular waterfalls.

Listed below is just a glimpse of a few such places in the northern region of India. 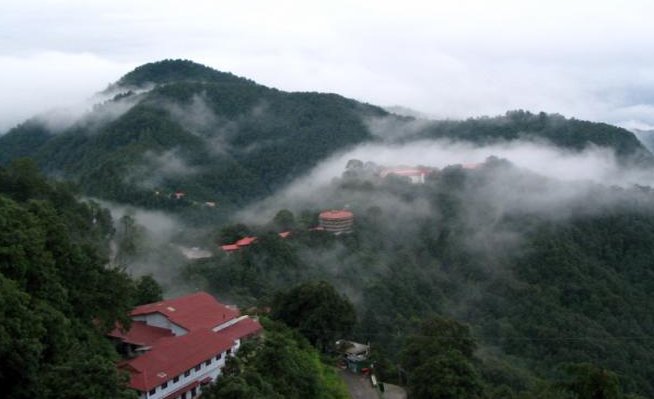 This beautiful hill station is located in the foothills of the Garhwal Himalayan range in the state of Uttarakhand. Also famous as the ‘Queen of Hills’, Mussoorie turns magical and very scenic during the monsoons. The hills, covered in different shades of green, get completely engulfed in mist and the grey clouds as a backdrop, this scenario becomes a tourist and photographer’s delight. The classic monsoon eats like roasted corn (bhutta), hot hot samosas, pakodas and jalebis with tea are available everywhere and entice the traveller as well as locals, making it a fun atmosphere. While here, one can enjoy the nearby places of Landour with its stately colonial/ European bungalows, Dehradun, beautiful ancient churches, the scenic trails of Nag Tibba Trek, Bhatta Village, Jharipani and many other attractions.

How to reach Mussoorie :

By Air – The nearest airport is the Jolly Grant Airport at Dehradun, which is 54 kms away and has very regular flights to Delhi.

By Train – The nearest railway station is at Dehradun, which has good rail connectivity with Delhi.

By Bus – Mussoorie is well serviced by a range of Private Tour Operators as well as State Transport Corporations who offer a wide range of buses from various cities. 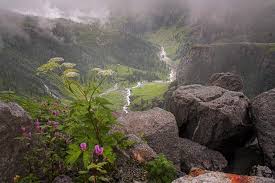 Tucked away in the mountains of Himachal Pradesh, at the northern end of the Kullu Valley, is the most popular hill station of Northern India, Manali. Famous for its spectacular snow-clad mountains, green rolling hills, crystal clear streams, the gurgling Beas river, thick pine-wood forests and exciting adventure sports, this destination turns even more alluring for monsoon lovers who enjoy the picturesque vista unfolding before them at this time. It is a different experience altogether to smell the pine forests, take long walks admiring the way nature unfolds during this period, enjoy the beauty of the blooming flowers all over or just chill in your resort or hotel balcony and gape at the unfolding beauty when it rains here. One can enjoy several attractions like the Pandoh dam, Jogini Falls, Bhrigu Lake, Solang Valley, Hidimba Devi Temple, etc.

How to reach Manali :

By Air – The nearest airport is at Bhuntar, which is 50 kms away and well connected with Delhi and Chandigarh through regular flights.

By Train – Manali does not have its own railway station. The nearest one is at Jogindernagar, about 50 kms away which connects Manali to nearby cities.

By Bus – Manali is well connected with Delhi and nearby cities in the state with Private as well as State-run buses of various types. 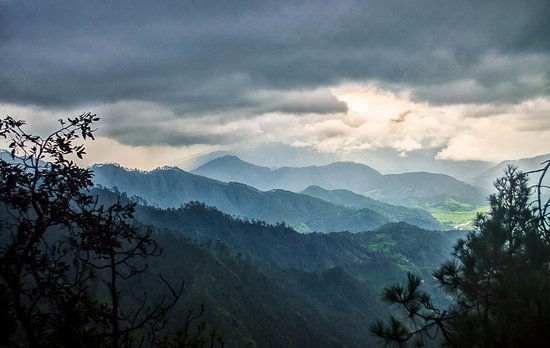 Kausani is a part of the Lesser Himalayas and is situated at the top of a ridge, in the midst of thick pine forests in the Bageshwar district of Uttarakhand. Located at an altitude of about 6,200 feet above sea level, this spectacular hill station overlooks picturesque valleys on either side. Famous for its enchanting landscape and 300 km wide panoramic view of the beautiful Himalayan peaks, Kausani was endowed with the title of ‘Switzerland of India’ by Mahatma Gandhi, due to its similarity of landscapes. During the monsoons, Kausani almost feels like heaven! Due to the thick mist hovering in the air, it feels like one is walking through clouds. The fresh, dark green trees that peep out in between the mist and clusters of delicate and brightly coloured flowers growing wild everywhere, glisten with raindrops and add to the enchanting beauty of this serene little town. Tourists can also enjoy the various attractions of the Gandhi Ashram, tea estates, Rudradhari falls and caves, the Bajinath Group of Temples and many more. Kausani is also well known for its close by trekking trails.

How to reach Kausani :

By Air – The airport at Pantnagar is closest to Kausani and has many flights coming in from several cities.

By Train – The nearest railway station is at Kathgodam.

By Bus – There are several buses plying between Kausani and other cities near by. 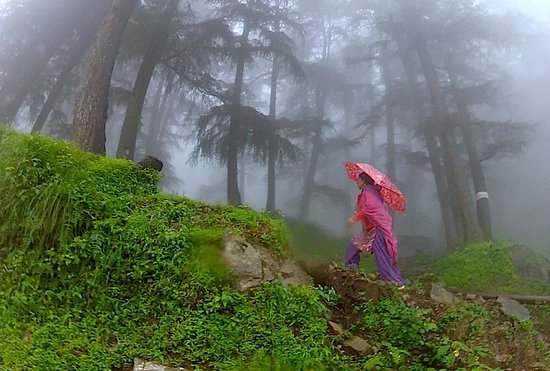 Renowned as the tranquil home of the Dalai Lama and second winter capital of the state, Dharamshala is this scenic little hill town in the upper section of the Kangra Valley in Himachal Pradesh and is surrounded by dense coniferous forests which contain impressive Deodar Cedar trees. This hill station is located at an altitude of 4780 feet and monsoons in Dharamshala, which occur from July to mid-September, range from moderate to slightly heavy, making it one of the wettest places in the state. Dharamshala, during this season is a carpet of vibrant and glistening green with raindrops clinging on to the freshly washed trees and leaves. The air has its own freshness and crispness and the overall serene and spiritual atmosphere of the resonating chants by Tibetan monks, prayer bell chimes and fluttering colourful prayer flags, leave a magical spell on tourists and visitors. One can visit the many beautiful tea gardens here and enjoy the tea which is very  popular in our country as well as across the world. Trekking to the wonderful Triund Hill and other nearby locations is another joyful activity, besides visiting other attractions like the Kangra Fort, various monasteries, Tibetan museum, Kalachakra temple, the War Memorial etc.

How to reach Dharamshala :

By Air – The nearest airport is 13 km away, at Gaggal, which connects Dharamshala to New Delhi.

By Train – The nearest railway stations is at Pathankhot, about 85 kms away. One can take a bus or taxi from here to reach Dharamshala.

By Bus – Several Private as well as State-run buses operate between Dharamshala and Delhi, as well as several other cities in North India. 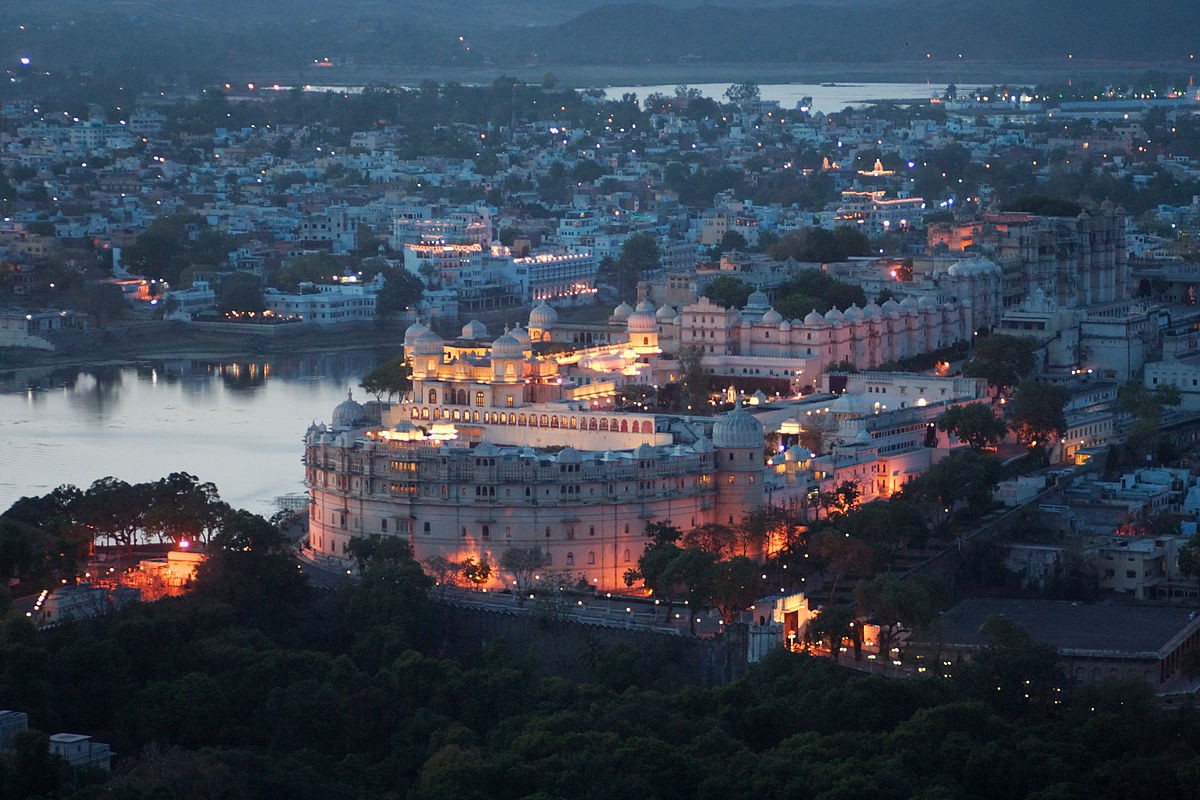 Well known as the ‘City of Lakes’ due to the presence of five major lakes and a very refined lake system, Udaipur is a major city in the state of Rajasthan. Surrounded by the Aravalli range, this magnificent city is also popular for its historic forts, enchanting palaces of the Rajput era, sculpted gardens, natural topography, architecturally beautiful temples, museums and galleries. Monsoons in this city generally occur from July till September and change the already romantic landscape of this destination, to an even more mesmerizing vista. The hills and gardens change to a fresh, dark green carpet, the lakes appear even more sparkling and scintillating with the falling raindrops and the general atmosphere in this city appears dreamy and amorous. Tourists can indulge in a cruise on Lake Pichola, enjoy the romantic sunset, take in the other attractive sights of the City Palace, Lake Pichola, Monsoon Palace, Gulab Baugh and many more.

How to reach Udaipur :

By Air – The Maharana Pratap Airport in Udaipur is well connected to several major cities in the country.

By Train – Udaipur has a very good rail network with many cities across the country.

By Bus – Udaipur is connected to many cities like Delhi, Jaipur, Kota, Indore, Ahmedabad etc. by a good bus network, providing both Private as well as State-run buses.